#Loeries2018: WiM Africa masterclass on the progress of women in media 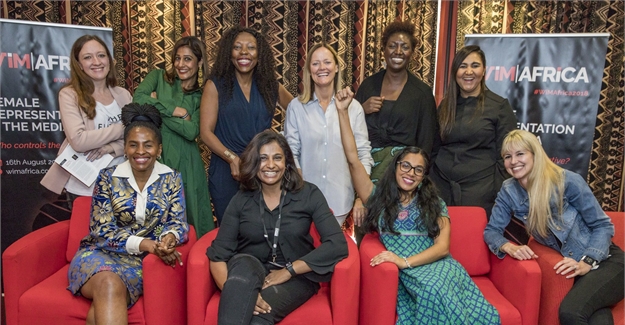 The Loeries masterclasses started with a bang, with the well-supported Women in Marketing Africa masterclass, followed by a panel discussion moderated by Bizcommunity's own Editor-in-Chief: Marketing & Media SA, Leigh Andrews, which offered extensive insight into where we are currently in terms of gender equality in the media, as well as how far we still need to go and how to get there.

Here’s what the speakers shared:

Andrea Opoku, director and ambassador of the WiM CIC

Opoku opened the masterclass by announcing the launch of WiM Africa – a network started in the UK by founder and CEO Ade Onilude in 2004, with the objective to educate, inspire, connect and recognise women in the marketing, advertising and communications fields. She reminded us that the deadline for the 8th Annual WiM Awards is 10 September 2018.

Next, Reeves and Ogilvie described the Free The Bid initiative that operates in the media industry to encourage the appointment of women in the industry. Reeves pointed out that with 85% of purchase decisions being made by women, brands need to ask themselves if they're speaking to their actual consumer and not following a stereotype. She also commented that there is currently a nuance of men hiring men, and commented on the hiring process of directors in the production industry:

Many agencies hire men because their showreel is ‘better’ but that’s because women haven’t had the same opportunities.

Free The Bid aligns with agencies to get them to appoint more women by signing a pledge (available on their website) to do so. Ogilvie reiterated Reeves' sentiments by mentioning that women’s voices are very underrepresented in the local industry and that we need to get women a place at the table, with a specific push to appoint women of colour and greater diversity.

Vawda and Grant represented the UnStereotype Alliance, a thought and action platform created by Unilever that uses advertising as a force for good to drive positive change, seeking to eradicate harmful, gender-based stereotypes. Vawda opened her address with the Fearless Girl video created by Interpublic Group, which intentionally places women in leadership roles and have proven to grow ahead of the norm, to reinforce the message she shared of the strength and power women hold, her views on parenthood and the values we should be raising our daughters with.

Grant also shared valuable insights, highlighting that black women (especially single black women) face the greatest challenges in the South African media industry, with the stats reflecting 60% of advertising showing white women. She also reported that only 3% of ads show women in leadership roles, and a mere 0.03% show women as funny. Referring to Unilever's stats, Grant pointed out that progressive portrayals of gender roles produce more talkability in advertising, and ended off by saying, “Women will never have equal rights in the workplace until men have equal rights in the home.” Sign up for the UnStereotype Alliance to help create a gender-equal world.

Gordhan kicked off her presentation by reporting on FCB's stats of women in leadership positions, which is currently 43%, with the aim of increasing the numbers. She said that in order to change stereotypes and really represent gender diversity, we need to find new words to use in our descriptions and new stories to portray roles as gender neutral.

She commented, “If you can see a link, grab it, especially if it offers a bigger platform,” and “Agencies have to demand more from brands, because people do,” explaining that it’s our job as the media to break taboos. Gordhan’s advice to the media: DO… despite what global thinks, despite fear and resistance." She ended off with the sentiment that when it comes to progress and development, it's possible that we stand in our own way.

Representing an agency that works with premium spirits, Njongwe started by saying that these brands don’t discriminate, so the advertising should appeal to a very diverse audience. She posed the question of “What kind of women are being represented in advertising?” with reference to the fact that all women need to be represented in all shapes and forms, but they also need to be represented in an empowering way and not in a derogatory fashion. She ended off by stating that agencies need to look at the perspective of the ad and who the ‘looker’ is (who the ad appeals to) combined with what they are looking at.

“Technology has allowed us to democratise marketing,” was the thought Ntshingila opened her address with. She continued saying that perhaps marketing has a greater role to play in this economy, with particular reference to women in the economy. Ntshingila explained that we need to look at the role of marketing in women-owned small-medium sized businesses and what democratising marketing is all about because, in SA alone, over the next five years, these businesses stand to unlock R175bn in this economy, over one million jobs, and over 800,000 companies.

With these enormous figures in mind, we need to make sure women are included in small- to medium-sized businesses. She ended off by commenting, “Facebook believes that when women do better, economies do better, too.”

The panel discussion was based on audience questions and also introduced initiative manager of the Advertisers' Activists Collective (AAC) Czerina Patel and CEO of DStv Media Sales, Fahmeeda Cassim-Surtee.

Patel opened by saying we need to ensure ALL women are included and represented in media, and not only the traditionally accepted stereotypes.

Q: How do brands successfully do this?

A: (Njongwe) We need to appeal to the market. If the market is diverse, the marketing needs to be diverse – and marketers themselves need to be diverse. (Reeves) The Free The Bid pledge changes the thought process of appointing women in the industry as it brings awareness. (Patel) The spotlight needs to be placed on projects focused on diversity, like a Loerie award for equality/diversity. (Gordhan) Discomfort usually leads to the most creative work.

Q: Can you share the realities of the demands of being in a senior position and advice on what others should/shouldn’t do?

A: (Ntshingila) What we do along our career journey is make choices – make sure you can sleep with all the choices you make. (Cassim-Surtee) It’s about finding and integrating opportunities to spend time with family. (Gordhan) You need to develop very keen negotiating skills in order to find balance, and surround yourself with people who support you.

Q: How do you change the image of influencer stories to ones that we should be sharing?

A: (Ntshingila) You don’t have to use influencers who already have a huge following, you can use someone who fits your brand image and build them up yourself as the brand.

Keep an eye on our Loeries special section for all the latest updates and live coverage of the 40th annual Loerie Awards, taking place in Durban from 16 to 19 August 2018.