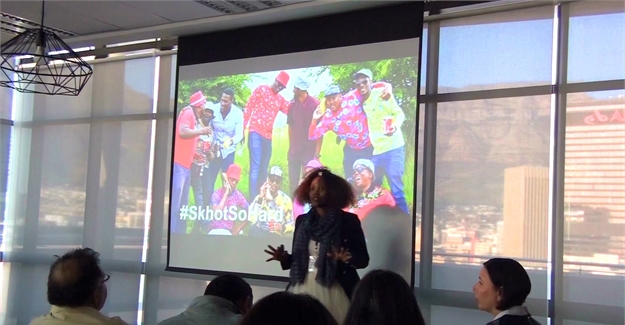 'Thinking outside the box' is a good way to improve your creativity skills. If you're a creative by profession, here's why Kantar Millward Brown says you need to see that bounding box as 'diversity', and how to go beyond it in your advertising.

On 18 July or ‘Mandela Day’ 2018 – the centenary of the birth of SA’s most globally iconic former leaders – Kantar Millward Brown hosted a session titled ‘Man vs machine and the quest for ROI’ at their offices on the Cape Town foreshore, having rolled out similar sessions at the ACA Masterclasses and Apex Awards held earlier in the week. Makhathini on stage at the ACA Apex Awards.

The morning was specifically focused on what the rise of AI means for creativity, and while all the sessions were informative and relevant, the one with the most staying power by far, especially on Mandela Day, when all things ‘diversity’ are celebrated, was presented by Samu Makhathini.

She is associate account director at Kantar Millward Brown and a self-professed diversity advocate. As a result, she presented 30 minutes of ‘rethinking your branding entirely’ insights into the role of diversity in advertising.

Makhathini did so by unboxing how to truly commit to inclusion and harness the power of diversity to grow great brands.

With the rising call for diversity and equality in the industry, there’s a chance your brand feels it’s already working towards being more diverse. There’s also a chance you’re completely missing the mark. Here’s why…

Makhathini started off with an overview of the current #SkhotSoHard movement, and said that as an industry, we need to first decide if we are a bunch of ‘skhotanes’ or just rather custodians for our own brands.

These blunders may have all been different in execution but they share an element of tone deafness, which Makhathini says happens if there’s no one in your team to call you out before it reaches the public. And so, the less diverse your team, the more likely these expensive mistakes will keep being made.

The case for diversity in creative work

That’s why diversity is good business, as racially diverse teams outperform the non-diverse by 35% and progressive ads are more effective, with research by Kantar Millward Brown and Unilever’s analysis of 186 ads finding that the most progressive ads 25% more likely to be effective as they trigger more positive engagement. They’re more engaging, enjoyable, relevant, different and surprising.

There’s increasing focus on this from a legal perspective with a focus on BB-BEE, but diversity is not just about race, nor is it a tick box. The following quote from the Diversity in Media and Advertising (DIMA) Summit 2018 explains it best:

“Taking every person from a place where they are most authentically themselves and allowing them to contribute to your organisation at their maximum level.

The next step then is to normalise diversity.

This means diversity is no longer the story, the people are. And that’s where brands are often falling short.

For one thing, these issues are now coming to light. At present, it’s expected to take 217 years just to bridge the current gap between men and women, to reach true gender parity.

Asked why it’s taking so long to bridge the gap and why we’re not changing, Makhathini said, “I don’t have the answers, if you can’t tell.”

Our natural instinct is to go for self-preservation, but that just perpetuates the cycle of fear. Instead, Makhathini says, “Why don’t we rather use that energy to preserve what the future looks like?”

No one is really free of blame in this regard as we all face unconscious bias, but keeping these practical steps in mind can help us move in the right direction and reach a point of true diversity:

It’s on all of us to raise an alert when something makes us uncomfortable and should not be taken as the norm, as Meghan Markle herself did at the age of 11 – and the brand listened:

That’s why Makhathini concluded we should do it for our own role models – whether yours is Madiba himself, Markle or Beyoncé – and also do it for our children, as Herbert Hoover said it best:

Blessed are the young, for they shall inherit the national debt…